What did the our soldiers eat at the front World War II ?

“Our cook made various soups and, sometimes, main dishes, called “vegetable disorder” – it was healthy and besides super tasty.
Maize (corn) groats was sent by the allies, at the end of the war – spring of 1944.
This was something new, therefore no one knew what to do with it.
They began to add it to the bread, thus making the bread become fragile and quickly become stale.
This situation therefore caused complaints of soldiers.

Soldiers complained to the cooks, cooks scolded the allies, who brought us maize.
But most important that our chef was not upset:
– first – he took the crescent rate of Maize
– second – sent a group of soldiers to the steppe, asking to collect almost everything – quinoa, alfalfa, shepherd’s bag, sorrel, wild garlic
– third – cooked delicious to taste and beautiful in appearance сorn patties.

These were such flat cakes with greens; bright, yellowish outside and burning – green inside. They were soft, fragrant, fresh, like spring itself.
Better than any other means, these cakes reminded the soldiers of the house and about peace life. Each of us dreamed of Victory Day!

Two weeks later, the cook made hominy (steep brewed cornmeal porridge).
For use instead of bread hominy cooked more thick and cut into pieces.
Almost the entire battalion became acquainted with this national Moldovan dish.
You know, our cook tried to make even simple acorn coffee tastier and more aromatic, adding there various herbs. First of all, a simple human attitude to the people on the battlefield. At any moment the soldier could die. Therefore any moment could be the last.”
From the memories of veterans of the World War II.

Field kitchen is a constant element of the Victory Day Parade in Russia.

The farther from the forties of the last century, the it is harder for us to imagine how people and soldiers survived in it’s a tough time.
Victory Day is celebrated on May 9th in Russia and many other former Soviet Republics. The country’s second most popular holiday – after New Year’s Day – marks Germany’s surrender to the Soviet Union in 1945, and becoming the canonical end of World War II, also known as the Great Patriotic War.

For more than 70 years, Russia has commemorated millions of people who perished and honor the surviving Veterans. All nation celebrate the Victory Day.

Parades are organized throughout the county as tribute to the bravery and heroism of the people who saved their country from Nazi invasion.
Veterans proudly wear medals of honor on their chests as they share their stories of war and victory with younger generations.
They carry fresh flowers, particularly red carnations and tulips and lay them down as wreaths at memorial sites to demonstrate respect for their fallen fellows.

Families gather around festive tables to celebrate survivors and recall the struggles of their parents, grandparents and great-grandparents.
At the parades, everyone is invited to feel the general mood and taste the dishes of the Field Kitchen.

What did the soldiers eat?
How was the field kitchen arranged?
What dishes were respected by the Red Army?

Labor in the army kitchen during the wartime was deprived of all romanticism.
At night, the outfit people did hard, exhausting work: they cleaned the never-ending potato breasts, washed and scraped boilers …

Norm number 1 daily allowance of the Red Army and the commander the composition of combat units of the army:

The food problem in the army was solved Much better than in the rear.
There was a ration.

Field cuisine is popular and relevant to this day.
We bring to your attention recipes that you can easily repeat in your kitchen! 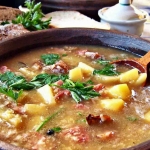 This “soup” is both the first and second course – it can be a full meal.
Prep Time30 mins
Cook Time30 mins
Total Time1 hr
Cuisine: Military
Keyword: Field kitchen
Servings: 4 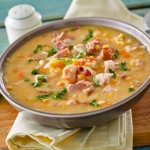 Potatoes with pork cracklings and onions

Potatoes with pork cracklings and onion

In the war it was a full second course. You can cook potatoes with pork cracklings and onions as a garnish for boiled chicken or serve as a snack for the national strong drink.
Prep Time15 mins
Cook Time20 mins
Total Time35 mins
Cuisine: Military
Keyword: Field kitchen
Servings: 4

Buckwheat porridge with stewed meat is a classic example of a military field kitchen.Tastier it turns out, if after mixing buckwheat and meat to add a bit of broth, put in pot or ceramic pot and put it in the oven.
Prep Time5 mins
Cook Time30 mins
Total Time35 mins
Cuisine: Military
Keyword: Field kitchen
Servings: 4 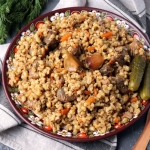 On this day, on the table often simple and delicious, as a rule, no exotics and delicacies.
To feel the atmosphere of that time, it is best to cook in a pot on the fire, as our grandfathers and great-grandfathers once cooked.

With the Day of the great Victory,  people of Earth!
Remember, whatever difficulties were in life, most importantly, to avoid war!

We Can Deliver On Projects

Of course, I want to go to a Russian shop, buy an Olivier salad, buy a Napoleon cake...Pelmeni, vareniki, borscht, sour cream...And of course, I like Russian food.

This Is A Custom Widget

This Sliding Bar can be switched on or off in theme options, and can take any widget you throw at it or even fill it with your custom HTML Code. Its perfect for grabbing the attention of your viewers. Choose between 1, 2, 3 or 4 columns, set the background color, widget divider color, activate transparency, a top border or fully disable it on desktop and mobile.

This Is A Custom Widget

This Sliding Bar can be switched on or off in theme options, and can take any widget you throw at it or even fill it with your custom HTML Code. Its perfect for grabbing the attention of your viewers. Choose between 1, 2, 3 or 4 columns, set the background color, widget divider color, activate transparency, a top border or fully disable it on desktop and mobile.